I didn’t get the usual lecture about smoking so I had nothing to rebel against, that’s how I finally gave up smoking - Sylvia Coleman

Around a year ago I was referred to The Christie for preventative surgery. My family has a strong history of female cancers and I found out I was at a significantly higher risk myself. To make matters worse, I was also smoker.

That is, until I met The Christie’s Health Promotion Advisor Charlotte Finchett nearly 12 months ago whilst coming to The Christie to have my ovaries removed and a double mastectomy.

I had attempted to give up smoking several times before and been to a stop smoking clinic, but the experience was not a good one. I had sat in a chair with a lady telling me how smoking makes you smell and showing me pictures of peoples’ lungs and a huge cancerous growth on someone’s neck.

I had also tried Champix, which was good because I could smoke for the first few days. It worked for me initially but then it made me feel sick and gave me strange dreams - so that was the end of that and I had another ciggy to make me feel better.

When I tried patches they didn’t seem to be working – until I worked out that they were getting stuck on my jumper and not my arm. When I did manage to secure them to my skin they gave me a rash and so, you guessed it – I stopped using them and decided to have a smoke.

Before my first appointment at The Christie I was so anxious that I smoked five cigarettes and during my appointment I kept thinking about having a ciggy.

After my first appointment at The Christie I was encouraged to attend The Christie’s Stop Smoking Clinic.

I had managed to reduce my intake to three cigarettes a day because I was having an operation but this would have been only temporary, I am sure about that.

I met Charlotte and was very impressed as she did not give me the usual lecture about smoking and she believed me when I said that I had already cut down to three cigarettes a day.

I did not feel like she was forcing me to stop smoking so I had nothing to rebel against. And I think that’s what must have worked for me!

Charlotte gave me a plastic thing which looked like a female item and showed me how to use it. I was not hopeful, but it worked. It was lovely as I could be honest about my smoking and was not made to feel ashamed about it or feel like a failure.

I didn’t dread the smoking cessation appointment – and actually started to look forward to having a chat with the staff and I even had a relaxing head massage at one of the sessions.

Charlotte and the staff understood that I smoked when I felt stressed or was being told not to smoke. They helped me to look at other ways of managing this.

I can’t believe that it has been 12 months already. I still feel like a smoker, but I choose not to have a cigarette, and this is all thanks to Charlotte and The Christie - so thank you very much.

I know as well as anyone how hard it is to give up. But if you are a patient or close to someone who is a Christie patient then it’s worth trying The Christie’s Stop Smoking Clinic.

If I can give up then anyone can. So give it a go.

Posted by The Christie at 08:45 No comments:

The Rhythm of Life Choir at The Christie - Katherine Marsland

I've always wanted to be in a choir, so when I heard rumours of a Christie choir being launched last year, I couldn't wait to sign up. One cold winter night last January, we held our first gathering and the 'Rhythm of Life' choir has been in full swing ever since.

Originally started as a breast cancer choir, the choir is now open to ALL patients and carers as well as Christie staff.

Each session usually starts with a few warm up exercises before we start singing. Over the past year our repertoire has grown and we sing a large range of songs from Latin canons, to musical favourites and traditional African songs. The rebel rousing 'Nana was a Suffragette' has become a group favourite along with the beautiful African song ‘Pura Mamine’.

Our teacher Carol, has the ability to a coax the best out of everyone. She also has a wonderful way of visualising and explaining the lyrics to each song. For example the latin lyrics to 'Da Pacem Domine', or Peace in our time, have become a stress free bus journey: "In-di-A- bus, no streees!"

Singing is good for the soul and as Carol explains, the primary aim of the choir is to make us feel good. For me, the choir has become both a fun way to spend a Monday evening and great way to escape the ups and downs of treatment. I love the buzz I get from singing and the 'feel good factor' you get from singing in a group. There's nothing more satisfying than getting your head and your vocal cords around a beautiful harmony.

As well as putting a smile on your face, research shows that there are lots of additional physical and psychological health benefits to singing. Apparently choristers’ heartbeats synchronise when they sing together, which can have a calming and bonding effect. It stimulates the release of hormones which make us feel happy whilst lowering stress levels. Singing also encourages greater lung capacity, improved immune system and even a reduction in chronic pain. It can even help control snoring. What's not to love about singing!

We had our first performance just before Christmas, singing to Christie patients waiting for their appointment, where we sang three songs. Although a little nerve-wracking, I really enjoyed performing and it was great to see the positive reaction our singing had on other patients.

Our numbers are slowly growing but we'd love some new recruits, so if you're looking for a great way to make some new friends and to share your experiences, then please come along. You don't need to be able to read music, just some enthusiasm, a warm jumper and bottle of water.

We meet every second Monday evening at 7.30pm in the conservatory in the glass corridor. If you are interested in joining the choir please contact Ros or Kathryn on 0161 446 3996 to check dates or email: Rosalyn.Fox@christie.nhs.uk or Kathryn.Rashed@christie.nhs.uk


Katherine Marsland sadly passed away earlier this year. This blog has been published with the support of her parents Doreen and Jim who knew how much Katherine loved coming to the choir and how much she gained from singing.

Posted by The Christie at 15:18 No comments:

Not many people are lucky enough to get to sing with a star like Chris Martin, lead singer of Coldplay, but that’s what happened to me last weekend at The Christie. And I could never have imagined that it would happen 18 months ago, but 18 months ago I had no idea that I was about to be diagnosed with Leukaemia.

When I was diagnosed with acute promyeloid leukaemia in February 2015, I lost my confidence and thought I had lost my love for music and singing.

I was being treated on the Teenage and Young Adult oncology unit and it was a tough time. My veins narrowed and I had to have a number of lines put in for the treatment to be administered. After every round of chemotherapy I seemed to pick up an infection and needed to be brought back to The Christie.

The nurses would joke with me because no matter how ill I was I always had my music on and was singing along to it - this was my way of coping with what I was going through.

It was during this time that I met Steph, the music teacher on the Teenage and Young Adult oncology unit, and she helped to restore my love for music and singing. Steph had confidence and believed in me.

Every time I had to come back to The Christie after treatment meant I could practice and learn new music. At first I wanted to learn a new instrument but the headaches and chemo made me so ill that I couldn’t stand to practice for more than 5 minutes, as it was just so hard to concentrate. So Steph suggested that it would be best to stick to singing and I agreed. 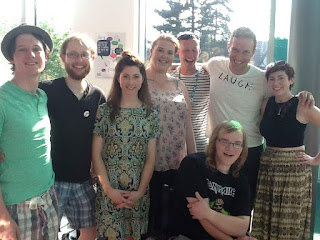 I was encouraged to get involved in the young oncology unit band called YOU62. The band is made up of young cancer patients who all come to The Christie on a Thursday to practice and learn new songs.

The band have done some fabulous things. We were invited to go to London for an amazing opportunity to record our own song at Vivid Colours Abbey Road which is now available to buy and the money goes to The Christie.

Going to The Christie and singing with the band is what is getting me through life at the moment. The band has given me so much more confidence and belief in myself. I have been given opportunities that I would never have believed in myself enough to do without the band, like singing at fundraising events and in front of staff and patients at Christmas and Halloween.

But, without a doubt my favourite experience was last weekend when Chris Martin from Coldplay came to meet the band and other young patients at The Christie. We were given the opportunity to sing for him and then to sing with him - one of his songs The Scientist!
I can’t explain how amazing this was. We then sat around talking to Chris. He asked us about the YOU62 band and we asked him lots of questions. Chris then posed for photos with us and singed CDs and merchandise. As he was leaving he said he’d had a lovely day and wished he didn’t have to go to work, as he wanted to stay and sing and talk to us, but he had a Coldplay concert at the Etihad stadium that night. 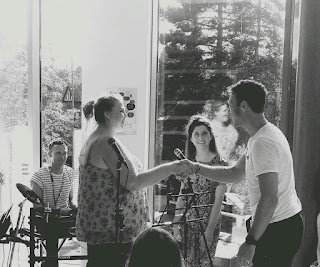 Chris’s tour manger came back with a gift bag for us all. It was so thoughtful, we had tour merchandise and badges, iTunes gift vouchers, felt tip pens, notepads and Lego - all things we can use when we are in hospital.

I went home smiling and telling everyone about my day and how down to earth and amazing and genuine Chris Martin was. I didn’t think the day could get any better but how wrong I was.

As I got home and opened Twitter and Facebook to upload my photos and videos Coldplay had posted a video from the concert. In it, Chris Martin was telling the whole Etihad stadium full of Coldplay fans how he had been to visit us and had the opportunity to sing with YOU62. He then asked the whole stadium to join in singing the chorus to The Scientist and said he was dedicating it to us. I was so overwhelmed. I was covered in Goosebumps and crying. It just shows that some celebrities are really down to earth.

I’d want to thank The Christie, the Teenage and Young Adult oncology unit and the music teacher Steph for believing in me and giving me all these wonderful opportunities.

Without The Christie, and all the wonderful thing they do for young patients, I don’t think I would have got through my diagnosis and treatment. I have also made some amazing friends and am so lucky to be part of a wonderful band doing something I love.
Thank you.

Posted by The Christie at 08:00 No comments: