There are some words that are always hard to hear, let alone say, but for many of us, living with cancer is a reality we can’t avoid. Conversations with the ‘C’ word are inevitable.


When I was diagnosed with stage 4 malignant melanoma (a type of skin cancer) I was offered the opportunity to join a clinical trial at The Christie. There were no other alternatives to treat my cancer at this advanced stage, so it wasn’t a difficult choice to make. If the trial wasn’t going to benefit me, perhaps some of the findings would help to develop more effective treatments in the future.


My initial trial was unsuccessful, the treatment I was taking had reduced the swelling in my lymph nodes in my neck, however the tumours around my body, just under my skin, were growing both in size and number.


The next conversation I had with the specialist registrar was probably the hardest I’ve ever had to have. The bare facts were presented to me and as far as he could see there was nothing else that could possibly be done. In his words, “It was time to face my own mortality.”


What is amazing about being a Christie patient is the fact that the doctors, nurses and other support staff don’t give up easily. They gave me the hope to try and face my future and find other options that might be beneficial. I was still strong physically and prepared to consider whatever could help me remain an active part of my wife and young family’s lives for as long as possible.


The chance to use a new style of cancer treatment was offered to me, an immunotherapy drug. It had been on trial at The Christie, but I was allowed access to it as a therapy. I really needed to have the comfort that I had tried everything so I jumped at the chance to trial the new drug.


Incredibly, within 24 hours of my first treatment, my tumours had reacted and changed. They were no longer dark and sinister but had changed to a flushed red.


My wife is still convinced she watched a large tumour in my neck slowly reduce as we sat watching a film. Not wanting to get carried away, we visited my consultant, I remember explaining what we could see, and saying, ‘I don’t want to get too excited, but…’ 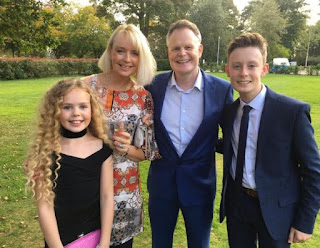 The response, once the evidence of my tumours reducing was obvious to my consultant, is one I’ll never forget: “Let’s all get very excited.”


Five cycles of treatment later, and after enduring some unpleasant side effects, I was clear of cancer. The last of my treatments was on my 40th birthday, in 2008. This year I celebrated my 50th birthday with my family, 10 years cancer free and living a normal life.


Thanks to The Christie, the ‘C’ word I can use now with confidence isn’t cancer, it’s cured.

Posted by The Christie at 12:00 No comments: